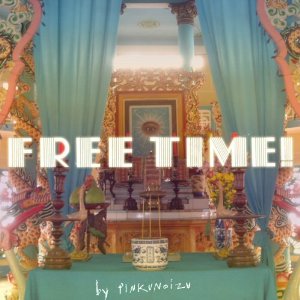 The hotly-anticipated debut album from Danish outfit Pinkunoizu (Japanese for Pink Noise, as you might've guessed) has arrived, and it's a brilliant achievement, stuffed so full of ideas and styles that it's hard to know where to start with it. With a lot of the tracks moving seamlessly into the next, this is definitely a record that you should listen to as a whole, as you immerse yourself into the high-concept lo-fi psychedelia that manages to sound like it's been made in the four corners of the globe, and the middle of outer space, all at the same time.

The album features a couple of tracks from last year's 'Peep' EP, starting with the opener 'Time Is Like A Melody', a lilting, melodic tune that's a bit reminiscent of Animal Collective as it builds to the looped crescendo at the end. This flows into 'Myriad Pyramid', which starts with the sound of the muezzin calling us to prayer. With percussion driving the track, there are some eastern themes in the melodies, some bleepy electronics in the background, and some almost spaghetti-western guitar, while overall the song has a bit of an MGMT feel to it. Talking of guitar, third track 'Cyborg Manifesto' takes the western feel up a few gears, and features the most surprising slide guitar solo that I've heard in a record for a long time.

Track four is the second 'Peep' track, 'Everything Is Broken Or Stolen', a fantastic journey through African and Eastern percussion and rhythmns which slowly winds its way into your head, stopping only for a radio retune halfway through. 'Parabolic Delusions' ends side one, it's perky Japanese pop tune making the perfect 3 minute pop song, complete with handclaps, saxes, a funky synth bassline and some suitably off-balance lyrics - "Like an endless loop of American troops, I will come for you".

Side 2 steps up the psychedelia, while generally being calmer and more spaced out. Just 3 tracks take up its 24 minutes, starting with 'The Abyss'. Wafting in on a sea of guitars, this gentle track soothes your soul, before letting rip with a great guitar solo at the end. Next up is 'Death Is Not A Lover', 9 minutes of trippy sounds, that starts with just an acoustic guitar and vocals, moves through an Eastern vocal and drums section into a brief country lament, and ends with some pounding bass and spoken words, followed by more MGMT-type singing and a general freak-out at the end. As a track it's a perfect microcosm of the album experience as a whole. Lastly comes 'Somber Ground', starting with some Mongolian throat-singing (or something similar), the first half is a downbeat guitar and vocals section, while the second half really lets rip, with saxes blaring, driving rhythms and a great male/female vocal to finish up with, before the studio pixies mangle the tapes at the end.

In terms of scale and ambition, this is probably the 2012 equivalent of last year's Gang Gang Dance album, but it delivers even more that that great record did. The way some of the eastern refrains are woven into the music reminds me at times of the way Matt Johnson used to use these influences, both on his solo album 'Burning Blue Soul' and on some of his The The stuff like 'Sweet Bird of Truth' and 'Armageddon Days Are Here Again'

If, no when, you decide to buy it, make sure you get the vinyl (available at Rough Trade) - not only does it sound great but it comes with a download code for the whole album plus two bonus tracks, the 12 minute epic 'Lacuna Island' and the more compact 'My Vacant Home'.