Track of the Day: 'I Try To Talk To You' by Hercules & Love Affair

Featuring the wonderful voice of Mr John Grant, this track is taken from the forthcoming Hercules & Love Affair album 'The Feast of the Broken Heart' which will be out in May. The song has already gained some degree of notoriety, as Grant tackles the subject of becoming HIV positive in the lyrics. Happily, despite the weighty themes, it's a pretty upbeat track, with a brilliant flourish of piano bringing a hint of disco camp to the proceedings. Following on from Grant's 'Pale Green Ghosts' album, this is another step down the road to him becoming the disco diva we all know he is deep inside.

There's something fundamentally strange about sitting down to watch music that's designed to make you move around. So The Barbican might not be the first choice of venue to put on a gig of this sort, but it certainly gives the evening a sense of occasion, which is fitting as the concert was put on to celebrate ten years of Bleep. Starting as the online store for Warp Records releases, it's since expanded to include a wide range of labels and artists, but still fitting with the Warp Ethos.

For their part of the show Mount Kimbie collaborated with artists Thomas Hamen and Igor Zimmerman. The two artists created a massive foil canopy over the stage, lifted by wind machines, that was lit from above and below. The best comparison I can think of is that it looked a bit like one of the solar sailers from Tron. Meanwhile projections based on works by Hamen played on each side of the band. Over the years Mount Kimbie have evolved into an impressive live act, more forceful than they are on record, and boosted by a live saxophone and trombone they put on a great show. It was definitely a different kind of experience to when I saw them at Koko last year, perhaps more thoughtful and less full-on, so it was good to see another facet of their character.

Fuck Buttons meanwhile have spent some of the money I assume they made out of soundtracking the Olympics on some impressive new visuals to match the more abrasive sound of their latest album 'Slow Focus'. As a result their live show is now a far more enthralling experience, and you no longer feel that you're just watching two blokes standing at either sides of a table. Their set was a mix of tracks from old and new albums, played with skill and force. In that venue, matched with the visuals, the music had an almost cinematic quality, with real power. As the night progressed pockets of people could no longer resist the rhythms and stood up to dance, challenging the rest to join in.

After the main show there was a free performance from Fennesz in one of the Barbican;s many spaces to round the evening off.

All in all it was a great show and a fitting way to mark Bleep's tenth birthday - long may they continue!
Posted by DJ Cull at 09:34 2 comments:

Track of the Day: 'I'm not into Twerk, I'm into KraftWerk' by Modeselektor

Released as part of an album that celebrates 10 years of Bleep, Warp Records' online music store, this track from the German outfit is a bouncing, vibrant piece of electronica. Even if you don't like the track, you have to admit it's got one of the best titles so far this year.

The celebrations for Bleep's birthday continue tonight when Fuck Buttons and Mount Kimbie play a special show at the Barbican in London together. I'll be there - watch this space for a report!

Track of the Day: 'Life Among The Savages' by Papercuts

This brilliant track is new on Memphis Industries by Papercuts a.k.a. Jason Quever. It's a gloriously cinematic sweep of strings and heartfelt, gentle vocals that will pull on your heartstrings. Recorded on 16-track reel to reel in his home studio, you can feel the San Francicso sunset permeating the track. Listen and download below.

Remix of the Day: 'Midnight (Giorgio Moroder Remix) by Coldplay

I'll be honest, I only heard the original version of this track the other day, and I was surprised by how much I liked it. Now this remix has come along and I like it even more - you can buy it today from iTunes, while the original version is on the album which comes out on May 19th.

PS I've got no tome for people who hate on bands like Coldplay. As far as I'm concerned, like the great man said there's only twop types of music - good music & bad music. And this is good, so give it a try (I love the vocoder bit in the middle)
Posted by DJ Cull at 11:21 No comments: 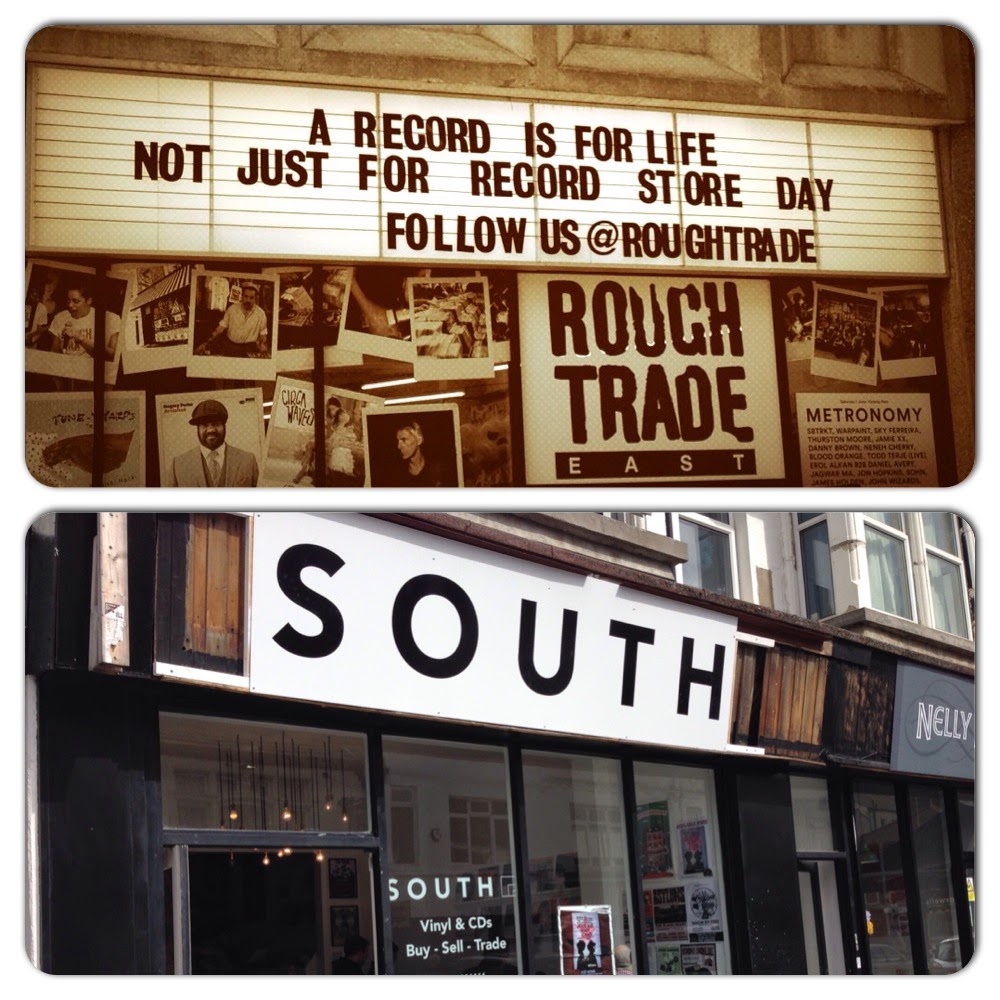 The annual vinyl fest that is Record Store Day presented me with a conundrum this year - a new record shop opened up fairly locally a couple of months ago; should I go to that and support the local trader or make my usual trip to London. I had to weigh up the fact that there would be less people in the queue at Southend against the knowledge that they would would have a smaller selection than Rough Trade East in Shoreditch. The solution? Go to both of course!

The alarm was duly set for 4:45 am (!) and I got to Rough Trade just after 6, seconds after my Crocuh End-dwelling shopping companion. A quick tally down the queue showed that there were already about 100 people ahead of us at that ungodly hour. Fortunately MJC had brought a flask of strong java to keep us going. Doors opened bang on 8 am, with the usual well-managed queue meaning that we were inside just after 8:30. The friendly chat while we'd waited had discovered that both I and the guy in front of me were after the LCD Soundsystem box set - he was in the shop ahead of me and kindly grabbed 2 off the shelf, handing me one before I'd even spotted where they were (people who like records are, as a rule, nice people aren't they?). Although some of the rarest stuff had already gone (I missed out on Liars and Damon Albarn) pretty much everything else I wanted was still there. I worked out the total, gulped, put a few of the non-essential items back (standard practice on RSD) but was happy with my final selection.

Although the live music at Rough Trade usually starts later in the day, we got a chance to see The Rails as they were on at 9:30, which was an early-morning treat. The early start was to allow them to play, in true Phil Collins Live Aid style, on both sides of the Atlantic in one day - after their appearance at Rough Trade East they were heading for a flight to New York, where they'll be on at Rough Trade NYC tonight.

Live set watched, I headed round to Liverpool Street Station for the train back to Southend, hopped on and from where I'm currently writing this. Here's a list of what I bought in London:

An hour later and I'm off the train and walking down Southend High Street to my second store of the day. A much smaller affair than Rough Trade obviously, but it was nice to have a chat with the staff (although I always feel a bit self-conscious looking through the racks when the staff are right bedside you). Luckily they had a couple of bits that I couldn't get in London so it was worth the visit - I grabbed these three:

Track of the Day: 'Heart Is A Far Light' by Wife

Recorded in the wilds of the Essex coast and produced by The Haxan Cloak, the brilliantly moody piece of electronica by James Kelly conjures up images of the rolling sea mists, barren marshes and general isolation that he must have experienced while recording the new album 'What's Between'. The vocals are buried deep within the music, occasionally breaking free to drift through your headspace. It's certainly got me anticipating the full album release, which is set for June 9th in Tri Angle Records.

Remix of the Day: 'Run Run Run (Ada Remix)' by The Notwist

Originally from one of my favourite albums of the year, 'Close To The Glass', this track has been remixed as part of The Notwist's release for Record Store Day 2014 (which takes place next week, on April 19th). It's a great reinterpretation of the track, with the glitchy electronica beautifully matched with the haunting cello. If you can find a vinyl copy in the shops next week it apparently comes with one of those concentric grooves so you're not sure what version of the track you're going to hear when you put the stylus on the record.

The always excellent Holy Ghost! from New York have provided this great remix for you to download for free. Full of bleeps, bloops and general electronic loveliness it's certain to get your feet moving and your head nodding (mine's doing that as I type this, that's how I know). Grab it below.

Remix of the Day: 'Romance Dawn (Unkle Reconstruction)' by Radkey

If the build up to James Lavelle's Meltdown Festival continues at this pace the whole of the Southbank might just explode on 13th June when the festival kicks off. The first Unkle remix for nearly 4 years sees him taking on teenage punk'n'rock'n'roll trio Radkey, turning their song into a hard-hitting acid-tinged electronic banger.

Radkey are playing the the Meltdown Festival in London on 17th June, while Lavelle kicks the whole thing off on Friday 13th. Full details here.
Posted by DJ Cull at 13:56 No comments: