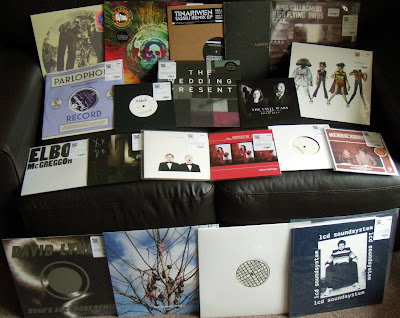 So I'm back from the annual Record Store Day pilgrimage to Rough Trade East - obviously I go there at other times during the year, but this special day in April is always a 'must-do'. Having arrived at 6.30 there seemed to be less people in the queue than last year, although they soon built up behind us. The shop was more organised than ever before, with the albums & 12"s arranged alphabetically in racks, and a special counter for the 7"s. Having filled up the baskets that Spencer handed to us Pete & I made our way to the back of the store to tally up our purchases, faint at the cost, and then sift out some of the less essential pieces. You can see the evidence of my haul at the top, here's a list of what I got (left to right, back to front):


I do have one complaint, which is that very few (i.e. only 2) of the things I bought this year came with download codes. I know that one of the points about the day is to get people to buy vinyl, but when you've spent 8 or 8 quid on a single, or £20-upwards on an album, it'd be nice to be able to listen to it somewhere other than in the same room as your turntable. Record companies take note and do more of this next year please!

Track of the Day: 'Fucking Around' by Peter and Kerry

An upbeat, quirky pop song with an even quirkier video. I'm pretty sure they played this when I saw them at the Tom Ravenscroft Christmas Party at Corsica Studios last December.

Their first full length album is due out on Tape Club Records later this year - looking forward to it! Also, the band have been added to the XFM Exposure show at the Camden Barfly on May 9th which is being headlined by Milagres, So if you've already got a ticker for that you'll be lucky enough to see them, and if you haven't got one they're still on sale here.
Posted by DJ Cull at 17:53 No comments:

Track of the Day: 'Lo Hi' by Peaking Lights

The first track to reach our ears from the forthcoming second album 'Lucifer' by Peaking Lights. The record is out on 18th June on Weird World Records and if this taster is anything to go buy it'll be a logical progression from their first release. 'Lo Hi' features dub rhythms, flutes, a child's voice and a whole host of other things designed to soothe your mind.

You can pre-order the album here.
Posted by DJ Cull at 21:21 No comments:

Track of the Day: 'Mind Control' by Friends

As their album launch date gets ever nearer, Friends are teasing us with this cut, which is set to be the final track on the album. It's slinky, it's funky, it's a bongo frenzy, culling elements from the '70s, '80s and '90s , but still sounding fresh for now.

Having seen the band live earlier this year I know that there are plenty more tracks as good as this on the way - roll on June 4th  when the album 'Manifest!' is released...
Posted by DJ Cull at 07:29 No comments: 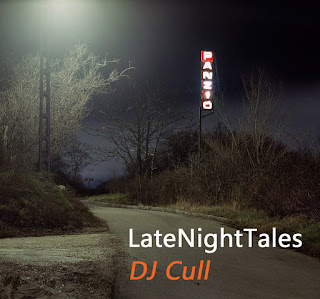 Inspired by the Late Night Tales series of releases, I've made my own selection of tracks for after-hours listening. If you've heard any of the previous ones, you'll know that there are always a couple of 'rules' that the compilers follow, so I've stuck to them as best I can. First off, there's the obligatory cover version, in this instance Zombie Zombie's version of the theme from 'Assault on Precinct 13'. And while I couldn't commission a new spoken-word piece for this, I've included a story / song by Jarvis Cocker at the end that does the job pretty well. To download the mix just right-click on the album cover above - here's the tracklisting:


The mix has got some new tracks and some older stuff, some well-known and some less so. Hopefully there's something to keep you interested - let me know what you think!
Here's the download link again if you can't get the one in the picture to work: http://dl.dropbox.com/u/53817625/01%20LateNightTales.mp3
Posted by DJ Cull at 09:22 No comments: 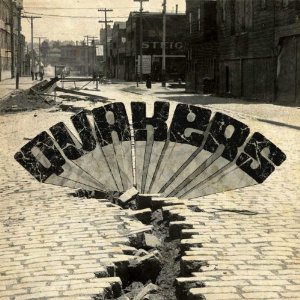 Quakers (the name derives from Earthquakers, rather than the religious order) is a 35 member hip-hop collective helmed by 3 producers - Fuzzface (a.k.a. Geoff Barrow from Portishead), 7-Stu-7 (Portishead's engineer) and Katalyst. Disillusioned with a lot of the current hip-hop crop, they set out to make the kind of rap record that they'd like to listen to, and this is the result.

At 41 tracks there's a lot to listen to, although a lot of them are around the 2 minute mark so they come and go quite quickly. Here are the highlights of the album for me:


The only minus points on the album go to 'Outlaw' -  the rappers name on this track is Deed but, given that he sounds like Justin Lee Collins, his voice is so out of kilter with the rest of the album that the records never really recovers from his contribution.

It's worth mentioning that this is the first album I've received from the new Stones Throw Digital Discography subscription service, under which you pay $10 a month, and in return you receive a download of every new album they release, together with exclusives and back catalogue releases (details here).

You can hear a few tracks from the album below: