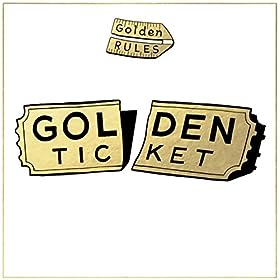 I'm a big fan of Paul White - his recent album 'Shaker Notes' was one of my favourites of last year - and this new project with Eric Biddines just reinforces the fact that pretty much everything he touches turns golden (see what I did there?). I must admit I wasn't sure what to expect of the record after the quirky, Outkastaliciousness of lead single 'Auntie Pearl's House', but this is an assured and mature record covering a host of styles, as well as another Outkast-style song in 'Holy Macaroni'.


White shows his magpie nature, dipping in and out of different genres to pick the bit's he likes and stitching them together beautifully. He even manages to sample himself, with 'It's Over' stealing from 'Where You Gonna Go?' on Shaker Notes.

Lyrically Biddines covers a range of subjects, dealing with life and love and everything in between, sometimes seriously and sometimes less so. 'Don't Be' gives advice on how to live your life without being a bitch to people, while 'Talkin' 'Bout' is one of those 'this is me and what my life's about' kind of raps where you find out that Eric "don't drink and don't smoke and don't like to do no dishes"

There's funk and soul on here too, as 'Down South Boogie', the next single, blends funk and disco with an insistent rhythm and a catch "we got another one, yeah we got another one" lyric. Meanwhile 'Play Some Luther' shows that Biddines can hold a tune as he gets his sexy on in this slow jam.

Anyone who can get Mos Def to make a guest appearance is clearly doing something right, and the smooth, downbeat sound of the track that features him 'Never Die' is definitely one of the highlights here.

Overall this is a great, positive hip-hop album, cliché free and full of invention.
Posted by DJ Cull at 19:30 No comments:

Freshly signed to the Brooklyn-based Wax Poetics Records, Minneaoplis duo Bones & Beeker make hip-hop and soul infused songs that at times seem to have come from a different time or a different planet (or maybe both). Anthony Newes and Brendan Kelly (aka BK-One) are both multi-instrumentalists who've worked cross-genre and seem to be able to turn their hand to just about anything. Joined by stalwart Minneaoplis bassist Chris Bierden, probably best known for his role in Polica, and guitarist Nate Collis, the music they've given birth to almost defies classification. Take 'Lupine', the first track they put out - a slinky bassline melds with a hip-hop beat, congas and even a whistling refrain to slowly weave in and out of your ears.


Meanwhile 'Each Time I Die' has a darkly electronic undercurrent which is lifted by castanets, brass and a bank of multi-tracked vocals in a riot of colourful sound.


The album is due later in the year and personally I can't wait to hear it, especially if they take it on tour - imagine the vibe if they play this stuff live.

Watch this space for more news on the album nearer the time.
Posted by DJ Cull at 08:00 No comments:

Track of the Day: 'Tierney Terrace' by Loyle Carner

One of the highlights of last week's Visions Festival was rising UK hip-hop star Loyle Carner's performance in the steaming heat of the London Fields Brewhouse. His new single has just dropped and it perfectly highlights his style and flow - lyrics about family and heritage, soulful beats and a genuinely emotional and heartfelt message.

The flip side is a homage to the little sister he's always wanted but never had. The record features Kwes on vocals but last week he did this as a poem with no beats and it was equally as powerful
Posted by DJ Cull at 15:39 No comments:

The sun always seems to shine on East London for Visions Festival, and so it was yesterday for the third edition of this annual event. This is a blessing in disguise as although it makes for pleasant strolls between the venues, it makes the venues themselves incredibly hot (especially the Brewhouse which was so hot and humid that it managed to turn the bar of chocolate in my bag from a solid to liquid state in about 30 minutes).

First on my agenda was Oscar at The Laundry. This was an upbeat way to start the day - Oscar Scheller has a deep, rich voice and some great, melodic hooks to go with it. I was surprised at the quality of his songwriting and although it might be hard to pigeonhole him into a genre or market I hope he makes it.

Next at the same venue were one of the current buzz acts, Girl Band. This four-piece from Dublin are loud and intense and definitely bring something fresh to the scene. It's hard to make out what he's singing but that's never been a barrier to success in the past and they definitely seem to be the sort of band they will inspire a rabid following.

Just over the road from The Laundry is the aforementioned boiling hot Brewhouse, where the heat was matched with the talent. Loyle Carner is the future of British hip-hop. He writes brilliantly aware, emotional and heartfelt lyrics, and is a great performer to match. As well as his raps he did 3 poems which were well received, especially the one about his mum who was in the front of the audience. If you get a chance to see him then grab it, you won't be disappointed.

Next in the Brewhouse (after one of their excellent homemade pizzas) was Torn Hawk, who matches video images with experimental music. I couldn't see all of his performance though as I had to head down to The Oval Space to see one of my picks of the day, Son Lux.

I've loved this band for a while so it was great to get the chance to see Ryan and the boys live. They played mostly tracks from the latest but with a couple of older ones for good measure. It was a really powerful performance, Ryan definitely puts his heart and soul into the performance and his emotion was matched with a rapturous reception.

Next it was time for a double bill back at the Brewhouse. Norfolk's finest Luke Abbott twiddled his modular knobs to perfection, building up to an electronic crescendo.

He was followed by California's Peaking Lights, who played a set of electro-pop-dub with some thunderous bass lines that got everyone dancing (including one or two of the guys from Merchandise who'd played The Laundry earlier.

Finally it was back up the road to The Oval Space for Holy Fuck, Having been away for some 5 years they treated us to a shitload of new tunes and their performance got better and better as they went on. No photos for this one as they were on a darkly-lit stage (and I was too busy dancing anyway).

Overall it was another great day, although I have a couple of (connected) gripes. St. John's Church in Hackney is a pretty long way from The Oval space, and led to people basically deciding whether to stay in Hackney or Bethnal Green for the evening as it wasn't feasible to move between the two. Also the organisers seemed to be trying to brand it as a 'Hackney' festival, no doubt for the hipster value, but most of the venues were still in Bethnal Green. So let's have the venues a bit closer together or if not, maybe a shuttle bus between the two?
Posted by DJ Cull at 22:45 No comments:

Track of the Day: 'Yonkers / Bowser' by Daedelus

A nice little freebie from the ever innovative Mr. Darlington. Released to celebrate this weekend's Low End Theory Festival it's got some great touches, including a melodic piano line that turns into a much more menacing synth line. Grab it for free below.

This blog is (at times anyway) a paean to LCD Soundsystem and all their associated wonders, so it's not really a surprise that I like this. Furman has stripped the track back to just an acoustic guitar and vocals, in doing so highlighting was a great songwriter Mr. Murphy is (not that you need me to tell you that). The track can be found on a bonus disc that comes with Ezra's new album 'Perpetual Motion People' when you buy it from any of the Rough Trade shops.