A great evening last night, put on by Attitude Is Everything to raise funds and awareness for their campaign to improve access at gigs for disabled and deaf people. First up were Wildeflower, playing the type of music first popular long before they were born (a bit folk and a bit prog), but doing a decent job of it.
Next on were Spaceships Are Cool - with a mixture of old synths, theremins and some normal instruments as well, they were poppier than I was expecting, and pretty enjoyable.
Headliners and highlight of the evening were Slow Club, playing their first gig in the UK since their trip to SXSW a couple of weeks ago. With a set mixing tracks from both of their albums they were in fine form, as you can see from the videos below. First up is a great rendition of 'If We're Still Alive':


and then there's one of my favourite tracks from Paradise, 'Never Look Back':

It's worth mentioning at this point that throughout the evening there were a couple of guys on the side of the stage doing sign language for all of the song lyrics. This led to the most amusing moment of the evening - for their encore Slow Club played a slowed down version of Pulp's 'Disco 2000'. As we got to the line "You were the first girl at school to get breasts" pretty much everyone turned to the guy signing to see how it would be translated - I can confirm that the sign for "breasts" is pretty much what you would expect it to be! 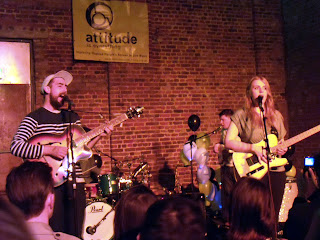 After Slow Club finished there was a DJ set from Ghostpoet - I had to make a dash for the train unfortunately, but here's a snap of him setting up.