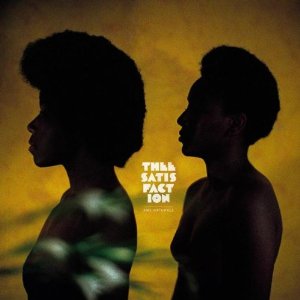 THEESatisfaction are Stas and Cat, a duo based in Seattle who have been slowly getting a name for themselves since they started releasing mixtapes in 2008. This, their first 'proper' release, has just come out on Sub Pop Records, and it's a brilliant blend of hip-hop, '70s soul and '80s funk, with a bit of electro thrown in for good measure. Although clearly coming from a hip-hop / rap background, the pair seem as comfortable and accomplished whether rapping or singing, allowing them to switch between the two with ease, kind of like a duo of Lauryn Hills.

The brief instrumental 'awE' opens the album, and quickly takes us into 'Bitches' which is just bass, percussion and handclaps, while the girls sing and rap over the top. 'Earthseed' features a mellow piano melody, with mostly sung vocals before a short rap at the end where, in true hip-hop style, they namedrop themselves.

'QueenS' is built around a repetitive groove, over which the girls offer to cure your ills - "let the musicians be your physicians" - and then 'Existinct' drops some smooth, jazzy vibes. 'Deeper' is exactly that, with a more electronic backing track and lyrics about looking beyond the colour of someone's skin to get to know them properly.

Next track up 'Sweat' builds an Earth, Wind and Fire-type groove under another mix of spoken and sung vocals, which gives way to the instrumental 'Juiced'. Featuring an unnamed guest male rapper at the start (unsurprisingly it turns out to be Shabazz Palaces, whose album the girls guested on last year) , 'God' is probably the most substantial track on the album, with some great lyrical flows and some interesting beats.

'Enchantruss' was the first track I heard from the album earlier in the year - it has a hypnotic feel that draws you in, and some great lyrics that mention Orson Welles, Archie Bunk and Jesus in the same verse - I particularly like the line "the black Jesus, which means of course he's white" - is this having a dig at Kanye West I wonder? A change of pace is provided by 'Needs', which is a mellow song about the girls' need to prove themselves. The weird 'Crash' is a minute long, and the only lyrics it contains are 'zero' and 'one', sung in a binary way - I imagine this is some sort of commentary on the economic state of the world (I could be completely wrong about this of course, but I like to give it some meaning, because if not the track is a complete waste of space). The album ends with 'naturalE', with Stas and Cat calling themselves the 'Queens of the Stoned Age' - this is another really strong track with varied beats, sung lyrics and raps, pretty much summing up the feel of the whole album in one track.

Any criticisms? Well, although it's got 13 tracks the album is only 30 minutes long, which is too brief for a debut album - surely they had more good material available than just these? I'm not asking for an overblown epic, but when most of the tracks are 3 minutes or less you could do with a few more of them. And their habit of randomly dropping capitaL letterS into song titles is irritating when you come to write about them. But really I'm just being picky about what is really a cool, sassy and intelligent debut album from THEESatisfaction.

You can grab yourself a free download of 'Enchantruss' below.