It's a bit overdue, but here's the latest instalment of my Austerity Audio podcast series. 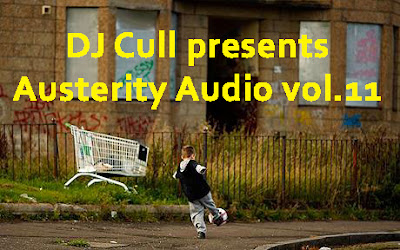 To make up for the delay I've thrown in a couple of extra tracks, so this week you get 12 slices of gres new music, each one legally extracted for free from the internet over the past few weeks. Ti listen just click on the image above, or right click to download to your home gramophone. In return for this lovely free music all I ask is that if you like any of the artists you spend some of your next spare cash on a track or two of theirs. Here's the tracklisting:

I know, some people are gonna hate this. I kind of hate myself for doing it. I'm a huge fan of Yeezy but the first time I heard 'Black Skinhead' I couldn't help thinking of 'Doctorin' The Tardis by The KLF (disguised as The Timelords). Once it was in my brain I couldn't get get it out. I thought that this might help shift it but I think it's just made it worse. But now at least it's stuck in your brains too, so I'm not on my own in this.


If enough people ask for it (and Kanye doesn't set the lawyers on my) I'll switch the download on.
Posted by DJ Cull at 17:29 No comments:

Video of the Day: 'Paper Trails (RA session)' by Darkside

Recorded live at Resident Advisor's London HQ, this version of the track from the new Darkside album 'Psychic' is twice as long, and all the better for it. It's great to see Nicolas ad Dave in action, constructing and de-constructing the track, making the most of the Chris Isaak-esque vocals before stepping up the beat and matching it with some great guitar playing. It's definitely an after-dark track, one that works on loads of different levels.

I noticed on the internet the other day that XLR8R were running a Ghostpoet remix competition, where they provided the vocals for a few of his tracks and you could do what you wanted with them. Here's what I came up with:

Being a simple soul, I was intrigued by the opportunity to put the Ghostpoet track together with another of the same name by King Midas Sound. I dug out the 'Kode9 and The Spaceape Rework' of the King Midas Sound track and proceeded to cut it and loop it to make a suitable backing track for Ghostpoet's vocals. I think the result works really well, with the spoken words on the King Midas Sound one echoing the sentiments on the other - what do you reckon?
Posted by DJ Cull at 18:10 No comments:

Track of the Day: 'For (Max Cooper Remix)' by Nils Frahm

In this great remix by Max Cooper, Frahm's gentle, flowing instrumental is gently turned into a mellow club tune that keeps the essence of Frahm's beautiful music while also showing some of Cooper's character. You can download the track for free below.

Frahm's new album 'Spaces' is out next month on Erased Tapes.
Posted by DJ Cull at 14:57 No comments:

Surprising cover version of the day - Iceage do Sinead O'Connor

For their new 7", Danish punk miserablists Iceage have recorded a couple of cover versions, of which this is the choice cut. Full of swaggering menace, it owes more to Nick Cave & The Bad Seeds than Ms. O'Connor, endowing 'Jackie' with a sense of venom and creating a powerful, brooding track. You can pre-order the single here.

Recommended music: 'There Is Nothing More Frightening Than The Passing Of Time' by The Superman Revenge Squad Band 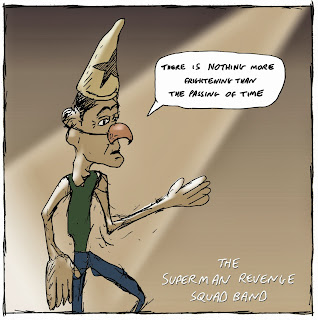 Sometimes you can tell that you're going to like a record just by reading the song titles. This album is a prime example of that - here's the tracklisting:


Who could fail to like an album with titles like that? I'm pleased to say that the songs themselves more than live up to their billing.  The albums themes - growing old, being a failure, modern life is rubbish but then it probably always was - fit perfectly with Ben Parker's world-weary delivery and the understated musical accompaniment. The lyrics are packed full of wit and a whole range of cultural references, from music "And 'Persistence of Time' by Anthrax means more to me than something like 'Blood On The Tracks'", through film "the scene from Rocky 3 where Paulie smashes up the pinball machine", TV "I clearly remember...Saturday mornings with Jimmy Greaves", and radio "I'm probably never gonna be on Desert Island Discs, but that doesn't necessarily mean that all of this was a waste of time", to the internet "I had to Google myself just to prove that I exist" and pubs "Wetherspoons meals are cheaper when there's two".

Snatches of lyrics and vocals on here remind me of Art Brut, particularly parts of 'I'm Gonna Go To Bed...'. It's the kind of thing that you could imagine John Peel playing if he was still with us, and in fact BBC Radio 6 Music, John's spiritual home, have already played some tracks. It's hard to imagine there being anything that you could do to this record that would make it more perfect than it already is. Anyone who can equate a break-up with Public Enemy performing without Flavor Flav, or R.E.M being stuck with having to play 'Automatic For The People' for the rest of their career, as Parker does in the immaculate 2 minutes and 35 seconds of 'Flavor Flav', should probably be installed on the fourth plinth in Trafalgar Square and instantly declared a National Treasure. To paraphrase one of Parker's lyrics from that song, I don't think I'd want to fight the power without him by my side.

You can download a free track from the album below.