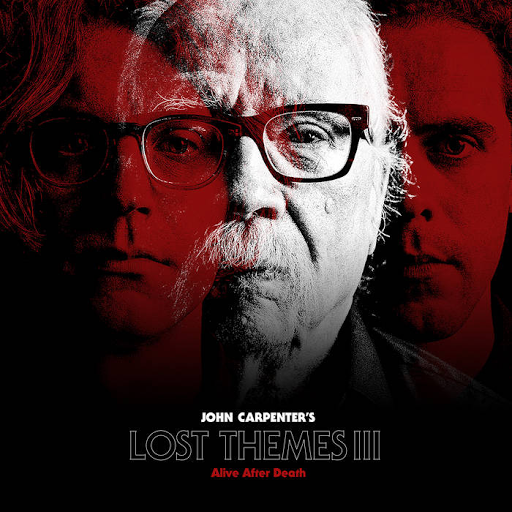 Arriving 5 years after volume 2, the third in John Carpenter’s ‘Lost Themes’ series finds him treading familiar territory. Subtitled ‘Alive After Death’, these may be original tracks rather than music composed for his films but it’s easy to imagine them soundtracking one of his signature style of movies. One look at the titles – ‘Dripping Blood’, ‘The Dead Walk’, ‘Cemetery’, Weeping Ghost’ – is enough to bring to mind plenty of gruesome images to fit nicely with the vibe he’s created here.

As with all of his recent work, the album is a collaboration with his son Cody Carpenter and his godson Daniel Davies. It’s clear that they have developed as a trio, in part by playing together on the road (I saw them live at The Troxy in East London on Halloween a few years ago), and John says that they can now “… communicate without words, and the process is easier now than it was in the beginning.” It’s nice to hear Davies let rip on the guitar every now and then as it brings a new dimension to the synth-led tunes. ‘Vampire’s Touch’ is probably my favourite track on here, for the way it starts off as a brooding synth piece and then turns into a pounding guitar driven monster.

I sometimes feel that Carpenter doesn’t receive his fair dues for his music and the influence he’s had on other composers and artists, from Cliff Martinez and Clint Mansell through to Hans Zimmer. If you’re new to his work and find yourself listening to this album and thinking ‘this sounds like X or Y’, then probably the reality is that X or Y actually sound like JC. And whilst his film-making career may be on hiatus, he can continue to make albums like this to inspire a new generation of synthwave artists.

‘Lost Themes III: Alive After Death’ by John Carpenter will be released on 5th February 2021 on the Sacred Bones label.