Track of the Day: 'Canterbury Pt. 1' by Dam Mantle

Regular readers will know that I've been a fan of Dam Mantle's music since I saw him at SXSW last year. After a long wait the debut album of Mr Marshallsay is just over the horizon and due to arrive on October 8th. As a taster you can grab the first track on the album for free below. It's a calmer, more studied affair than some of his previous outings, building a subtle groove over a crackly backing, which bodes well for the rest of the album.

Day 2 of V dawned as hot and sunny as the previous one. Whilst the crowd felt a bit sluggish to start off with (a combination of over-indulgence and sunburn from Saturday), The Stranglers had no such problems, blasting out hits like 'No More Heroes' and the sunshine-appropriate 'Peaches' on the main stage like they were 30 years younger.

Moving over to the 4Music stage we saw The Rifles, one of a number of 'next big thing' bands who never really took off. They were pretty good, engaging the audience and keeping a sizeable crowd even when what seemed to be a tropical deluge hit the park.

Half an hour later the rain had disappeared and The Feeling had taken its place. Thankfully they only played one new song and mainly restricted themselves to orchestrating crowd singalongs of some of their different tunes (I know a lot of people hate them, but secretly everyone joins in with 'Sewn', don't they?).

By the time Madness came on the temperature was peaking, but that didn't stop the masses in Chelmsford having a good old dance to the likes of 'One Step Beyond', 'Our House' and a pretty good cover of 'I Chase The Devil'. Even the appearance of Olly Murs to sing 'It Must Be Love' with them couldn't take the shine off the party - it felt like the Olympics had never ended.

Talking of parties, someone who must have been to a few fair in his time is the legendary Tom Jones. 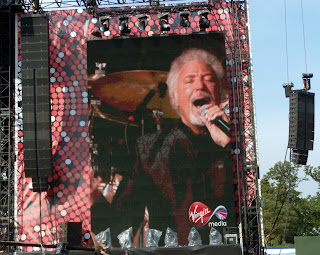 While his recent appearance on The Voice must have brought him some new young followers, the man is a legend for one reason, and that's his voice. Showing no signs of deterioration even now he's 72, he put it to good use in a set mixing classics with a few newer songs, including the Jack White produced 'Evil' and his cover of Leonard Cohen's 'Tower of Song' (probably the best Cohen cover since Jeff Buckley did 'Hallelujah').

To rapturous applause and mass singing he closed with 'The Green, Green Grass of Home', 'Delilah', 'It's Not Unusual' and 'Kiss' - how many of today's artists have got a back catalogue as good as that?

A trip to The Arena stage found more nostalgia, and a much bigger crowd than I expected, for The Human League. Despite playing the obligatory 'new one' (which for me would've been much better replaced by 'The Sound of the Crowd') they got everyone dancing, and the volume of singing to their last 2 songs 'Electric Dreams' and 'Don't You Want Me' pretty much lifted the roof off the tent.

In contrast Noah and The Whale found themselves faced with a pretty small crowd for their turn on the 4Music stage. While Charlie'd weird mid-Atlantic accent can be a bit grating they've got some good songs for a sunny evening festival slot, especially the Tom Petty-alike 'L.I.F.E.G.O.E.S.O.N'.

Back to The Arena stage for a chance to see the 'classic' Happy Mondays line-up, including the unmistakeable Bez. Shaun Ryder was on good form, laughing and joking with Rowetta, and the whole thing felt like a celebration of good times past.

We watched The Killers from a distance, and closed our V 2012 experience singing along to 'Mr. Brightside' and 'All These Things That I've Done'.
Posted by DJ Cull at 17:19 No comments:

It was unbelievably hot and sunny at V Festival in Chelmsford this year (we didn't complain, knowing how many other events had been washed out this year). Saturday was really all about the headliners, but we took some other acts in along the way, starting with The Twang who displayed a knack for wearing unnecessary headgear and playing baggy tunes:

Next up was Inspiral Carpets, and a chance to remember just how good a song 'This Is How It Feels' actually is. 'She Comes In The Fall' and 'Saturn 5' also sounded great in the sunshine.

A trip to the Arena Stage gave us some much needed shade while we listened to Jack Beats energetic sounds, and then it was back out into the sun to hear last-minute replacements (and much better option than Dappy) The Charlatans.

Labrinth was up next on the 4Music stage, the brightness of his shorts matching the vibe of his set, full of upbeat tracks which showed that he's probably a lot more talented than some people give him credit for.


Next we bounced around in the sun to Example (no pictures of this - too many hands in the air!), and then it was time to don our singing heads for Noel Gallagher's set. He struck a great balance of the best songs from his solo album with some classic Oasis tunes.

An acoustic 'Supersonic' (dedicated to Mo Farrah) went down particularly well, as did 'Half A World Away' and the mass singalong for set-closer 'Don't Look Back In Anger'.

And so to a headline set that even this time last year was completely unimaginable. The Stone Roses played the whole of their debut album and a few choice cuts from 'The Second Coming' looking like they were the best of friends and would be together until the actual Second Coming. With Ian Brown looking resplendent in his customer-made Roses hoodie they kicked off with 'I Wanna Be Adored' and we immediately awesome.

For me the set sagged a little bit in the middle when they played 'Something's Burning', but from the moment they followed it up with the double header of 'Waterfall' and 'Don't Stop' they were astonishingly good. The show ended as it should do with 'I Am The Resurrection' and mass hugs, both onstage and among the crowd. They left the stage to the sound of Bob Marley's 'Redemption Song' and a massive firework display having given us all a truly unforgettable experience.

My first visit to the Hoxton Bar & Kitchen (which turns out to be a great venue btw) for my second Lower Dens gig this year.
First up were a band called Indians, from Copenhagen in Denmark. With three keyboards and no drummer they've got a really interesting sound. The vocals were great, with hints of Fleet Foxes, which soared over the layers of keyboards. They've only had one single out so far (which I bought on white vinyl from the band after the gig) but they're definitely worth keeping an eye out for in the future.

Lower Dens were on even better form than when I saw them back in May. With the band spread across the stage, and Jana no longer taking centre stage, they rolled their way through tracks from Nootropics and older ones as well.

'Brains' was a highlight as always, but there wasn't a duff song all evening. Here's some footage of 'Propagation':

It might just have been the sound system, but the guitars sounded noticeably beefier than at The Lexington, giving a real shimmer to some of the songs. Only 4 months to go until I see them again at the ATP Nightmare Before Christmas!

Track of the Day: 'Elizabeth's Theme' by Dirty Beaches 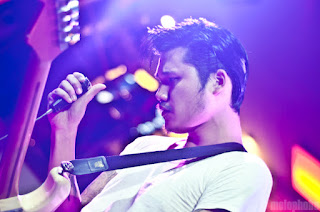 Wafting into your headphones like a summer breeze comes this gorgeous new track by Dirty Beaches. A lazy, hazy, late '60s instrumental vibe permeates the air as acoustic guitar and gentle piano float through the ether. Try listening to it without imagining that you're walking along a deserted beach at sunset...you won't succeed. The most beautiful and gentle piece of music you'll hear this week. Listen and download for free below.

Track of the Day: 'Shore Enough' by Naive Machine

Some summery, squelchy vibes for your weekend courtesy of Dave & Jim aka Naive Machine -  I particularly like the vinyl crackles 2 minutes in. Grab it while it's hot using the link above.
Posted by DJ Cull at 17:43 No comments: