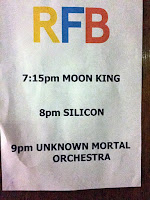 A brilliant evening at the Islington Assembly Hall kicked off with Toronto band Moon King. Lead singer and driving force Daniel has a great voice and is a powerful frontman. At times they rocked out pretty hard and at others they mellowed out a bit, but overall they had a lot of energy, and anyone who claims that their 2 favourite songs are 'Halcyon and On and On' by Orbital and 'Harvest Moon' by Neil Young is alright by me.

Next up was Silicon. Fronted by Ruban UMO's brother Kody, this was a performance and a half that enthralled and mystified the audience in equal measure. After spending the first song onstage Kody very quickly jumped into the audience and spent most of his set there. Dancing, prowling, posing, walking along the edge of the balcony and even stroking some hipster beards, he packed his set full of spiky energy. He even performed a cover of UMO's 'Can't Keep Checking My Phone' while Ruban watched and sang along from the side.Personally I loved it and I'll be watching out for them next time they're on town.

And so to headliners Unknown Mortal Orchestra. From Ruban Neilson's solo project UMO have evolved into one of the tightest and together live bands I've seen for a while. Ruban is a brilliant guitarist and a thoroughly engaging frontman and together with the rest of the band he plays a brand of soulful and funky indie music that doesn't really exist anywhere else.

New and old songs mixed together well and were given the chance to breathe, expanding through some great flourishes and solos. No need to pick out highlights as the whole set was one big smile on my face from beginning to end. I can only imagine how great this stuff is going to sound on sunsetting stages through the festival season.

Unknown Mortal Orchestra are back in the UK in October for another tour and you really should go and see them, because they're ace.
Posted by DJ Cull at 16:09