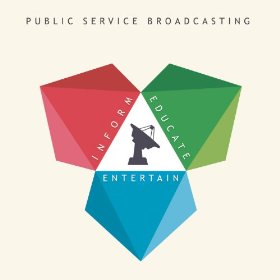 There's something quintessentially British about this record. It's not just that most of the samples are from old British documentaries and Public Information films (there are some American clips on here as well, especially on 'Signal 30' with its warnings of the perils of driving). It's not even the subject matter, although tracks about Spitfires, climbing Everest, and an inspection of the Royal Navy fleet (by what sounds like a tipsy Admiral) add to the sense of Empire and days gone by. It's just that the whole concept of making a record full of clips that might, as the title suggests, inform, educate and entertain you doesn't seem like the sort of thing that would emanate from, say, the United States.

Public Service Broadcasting (or PSB as they're often abbreviated to, although this risks confusing them with Pet Shop Boys) is really the work of one man, the gentlemanly-titled J Willgoose Esq. Live he's joined on stage by the singularly-named drummer Wrigglesworth, and together they play an eclectic mix of sounds and dialogue which is matched with black and white video footage. The music sounds a bit 80s retro (apart from the banjo (!) wherever that comes from, and is a good match for the even older voice clips. If occasionally there are some rather obvious samples (WH Auden's rail poem on 'Night Mail' for example) the rest still manage to sound fresh even after numerous listens. Overall it's the kind of record that brings a wry smile to your face when you listen to it - a bit like a well-behaved house guest it's interesting, polite, and doesn't outstay its welcome. You can hear some tracks from the album below.