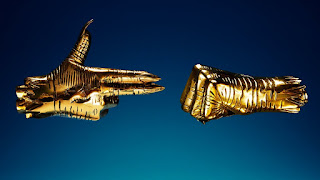 Like a present you never dared hope for, 'RTJ3' dropped unexpectedly on Christmas Day to fill your stocking with beats and rhymes. Following their usual distribution model Killer Mike and El-P gave it away for free, but you'll also be able to buy it from iTunes, Amazon etc., and there's a host of physical products and merch you can pre-order from here if you want to support them financially.

A lot's happened since the release of 'RTJ2' a couple of years ago, not least Killer Mike becoming some sort of unofficial spokesman on black issues in America, and you can feel the weight of what's passed on this record. Overall there's a sense that they're taking things seriously and this is no longer just two guys fucking about, getting high on weed and mushrooms and making music to please themselves. the music and lyrics are both more powerful and there's a higher proportion of proper melodies in place. Having someone like Tunde Adebimpe feature on 'Thieves! (Screamed The Ghost)'' no doubt helps but overall El-P seems to have upped his production game by a few notches, and there's not a single duff track in this bunch.


From the acknowledgement of their own stardom (on 'Call Ticketron'), through the politically charged 'Thieves!' and the nightmare view of the future on '2100' this is the sound of a duo on the top of their game.


If you're one of those people bemoaning the lack of protest music in these turbulent times then you need look no further. This is the sound of a black man and a white man uniting their voices against racism, fascism and all of the other shit in the world today. 'A Report To The Shareholders: Kill Your Masters' might take things to the extreme with its "kill your masters" refrain but sometimes desperate times call for desperate measures.

In summary, and because the official release date is 13th January, this is the first essential album purchase of 2017.