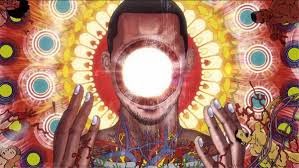 First things first - this is by no means an easy listen. Don't think you can just put it on in the background and do other stuff because if you do it might just sound abrasive. But turn and face the music, give it your full attention, and you'll be rewarded with a fully immersive journey into death and the afterlife. Also, don't be put off if you don't like the start, the first few tracks (side 1 of the double vinyl) are by far my least favourite of what Steven Ellison has served up here. But stick with it, because from the moment you put side 2 on and Kendrick Lamar joins in on 'Never Catch Me' it turns into a magical, wonderful record, full of twists and turns, light and shade, explosive moments and quiet corners.

There's been a lot of talk about this being a 'jazz' album, and if you had to pigeon-hole it then that's probably where it would end up. It's so much more than that though. If it is jazz then it's certainly jazz for the 21st or even 22nd century. There's other styles as well though; 'Coronus, the Terminator' is a hip-hop / soul hybrid, while 'Ready Err Not' recalls his earlier electronic influences. Throughout the album the amazing bass stylings of Thundercat take flight, as he runs up and down the frets and lightning speed. He also adds vocals to some of the tracks, along with the Kendrick Lamar and Snoop Dogg. Elsewhere FlyLo's alter-ego makes a couple of appearances, as does Herbie Hancock on keyboards.

I think it's great that in this day and age people like Flying Lotus are still making committed, unflinching, uncommercial albums like this - sure the Lamar track will draw a few people in, but really this is the sound of Ellison taking all of his culture and heritage and wrapping it up exactly how he wants it to sound.

A word on the packaging - the vinyl boxset is lavishly put together, with a fully-printed gatefold holding the original album, with printed inner sleeves, plus another two slabs of vinyl with instrumental versions of all the track. You also get a full download of both the standard and instrumental tracks.