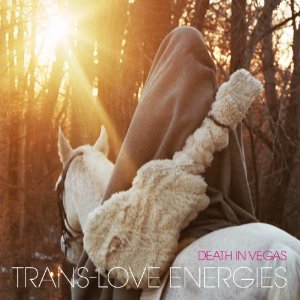 Seven years on from their last album, and now purely the work of Richard Fearless, the new album from Death In Vegas is here, and it's a corker. The album kicks off with 'Silver Time Machine', and a list of rock stars who've died - Sid Vicious, Elvis, Hank, Gene - have apparently 'left me' as we're invited onto Richard Fearless' space craft, which he says uses 'celestial mechanics'. Once the invitation has been made the track begins to coalesce and take shape, before blending straight into 'Black Hole'. Despite the rather tired lyrical cliches in this one - 'Like a black hole you stole my soul' - this track successfully picks up the pace with some droning guitars and an insistent energy. The spacey lyrics and themes on this track also permeate the album - it's an adventure that's part 'out of your mind' and part 'out of this world'.

'Your Loft My Acid' takes an almost acid house backing track (is Fearless paying tribute here, or just showing his age?) and tops it with a vocal that's part Goldfrapp and part Donna Summer's I Feel Love. Next up, and continuig the drug theme, is 'Medication', an uncomplicated track where Fearless again takes lead vocals and sings quietly about wanting to take a trip with you. 'Coum' matches a backward-looped backing with cautionary tales of drug abuse - 'Too much coke, it sucks your life' - and then 'Witchdance' takes over. This is one of the best tracks here - with female vocals over a forceful backing track, it's musically reminiscent of both Depeche Mode and UNKLE.

A sparse techno backing on 'Scissors' supports further drug-based vocals - 'I wanna get high tonight' - and is followed by 'Drone Reich', a beat-less instrumental which is pretty much what you'd expect from its title. It's refreshing to hear real instruments on the album rather than just electronics; 'Lightning Bolt' has real bass and guitars topped off with electric blips and swooshes, and is the track you could most easily imagine being performed live on stage by a band. The final track (on the standard edition) is 'Savage Love', a seven minute instrumental that ambles along for exactly half its length before supplying us with driving, droning guitars for the  second half.

The special edition of the album is well worth seeking out, as it has 10 more tracks on a second disc. These include 2 remixes and 2 instrumentals of tracks from the first disc, and 6 new tracks. Of these the pick of the bunch are the crisply electronic I.W.Y.L.A., the glitchy slow beats of 'Come Ride With Me', and the brilliantly-titled 'Moe Tucker' which closes the second disc.

Overall the album is a hazey, spacey ride through the world of Richard Fearless that's full of energy - dive in a take a trip with him.

You can hear some music from Death In Vegas below, including a sample of the album and a mix that Fearless did recently for the Tom Ravenscroft show on BBC 6music (both of which can be downloaded for free).