'Scratchcards & Wine' eh? The world's shortest shopping list, or a couple of things that help to get you through the day? If it's the latter then DB Cohen's album should be added to that list, as it's pretty much guaranteed to put you in a good frame of mind. 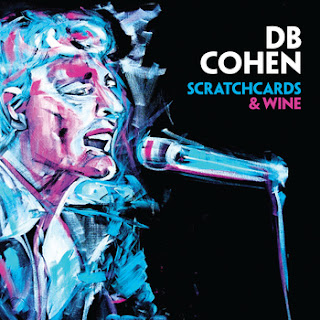 Born in South London and raised on a diet of Bob Dylan, The Kinks and Cream, Dan Cohen could well be the South's answer to Alex Turner. Lines like "Snowboy is talking 'bout fun with Steve Hawking, Chomsky is running the bar but he won't serve American boys" (from 'Dinner Party', about the ultimate fantasy party) or "She's betting I'm a gambling man" (from 'The Dealer') show that he's as on top of the lyrics as he is with the music. There's an English feel to the songs that brings to mind Madness or The Kinks, but there's also more than a hint of The Libertines in some of the tracks and the vocal delivery. On the slower tracks you can feel the Dylan influence, as well as 'Exile On Main Street'-era Stones.

After a few listens some of these songs feel like classics that have been with you for years. Dan plays a mean harmonica too which he makes good use of and which adds to the timeless feel of some of the tracks.

The album was produced by Essex legend Snowboy (as namechecked in 'Dinner Party') and features a host of quality musicians including Mark Saunders (bass player with Florence + The Machine), Southend bluesman Steve Hooker, Mike Webster (Baddies) and the horn section from The Specials. Live at Village Green last week he even managed to rope in Adele's backing singers!

Overall this is a greatly entertaining and enjoyable record which you really should buy (see below for the full album stream and purchase links on Bandcamp). If you fancy catching DB Cohen live there's a show at London landmark The 100 Club on 10th August that will be well worth going to (click here for ticket details).