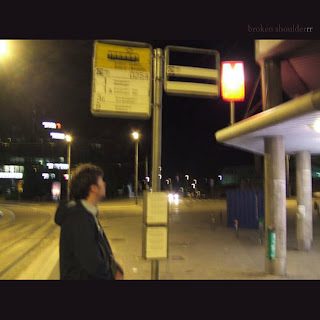 The first solo release from Neil Debnam of Fighting Kites, 'Broken Shoulderrr' somehow manages to create the impression of being minimalistic and densely impenetrable, both at the same time. Repeated listening reveals something that is hypnotic and strangely soothing, as the part-improvised music meanders it's way into your brain. At times it's quite sparse, but there's always an undercurrent of confidence, that the music knows where it's going, even if you don't.

There are hints of Mogwai in the first couple of tracks, and then, as the record progresses, it becomes more abstract, with heaps of distortion occasionally cut through with crystal-clear sounds. It's not much of a leap to describe this as something approaching 21st, or maybe even 22nd, century classical music - long instrumental pieces that at times seem to meander without a destination, but in most cases do arrive at a conclusion.

Final track 'Shoulderrr' is menacing and distorted, like the feeling you get walking down a street late at night and you suspect someone is following you.

You can listen to the whole record, and get a free download of 1 track 'Uff/Magow' here.

It's released on 27th Match on Audio Antihero records, and you can pre-order it from Play.com here.
Posted by DJ Cull at 12:27