Track of the Day: 'The Way (Blood Orange mix)' by Friends 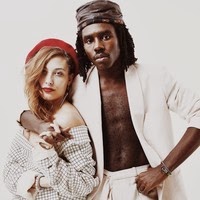 I know this appeared on the internet a few days ago but I thought it was the perfect way for you all to ease your way into the weekend (and recover from all your Black Friday expenditure). I know it's billed as a remix but to me this sounds much more like a duet between Dev Hynes (Blood Orange) and Samantha Urbani (lead singer of Friends). You'll know from this blog that I've always been a fan of Friends, although for me their debut album didn't live up to their early promise and their live show. However, this track hints at a promising new direction for them, so maybe they could get Dev in to produce the album for them, assuming it doesn't compromise their relationship (if you didn't know, Hynes and Urbani are an item).

This sultry, steaming slice of aural sex reminds me sooo much of Prince & Sheena Easton it's untrue, but to me that just adds to its charm, as does the fact that it's available as a free download. Grab it below and then go get it on with someone.