Recommended music: 'The Cavalry Never Showed Up' by Rotifer 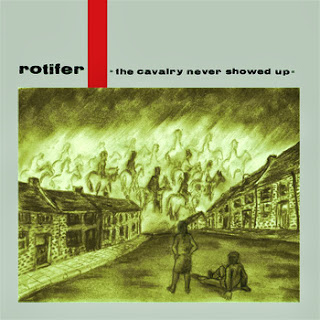 This album came to my notice via the Rough Trade Tracks of the Week service (details here), who included the brilliantly titled 'I Couldn't Eat As Much (As I'd Like To Throw Up)' a couple of weeks ago.That track opens the album, and also contains the line that the record is named after. It turns out the track is equally as good as its title (liberated from the German Jewish expressionist painter Max Liebermann), and it's also got a damn fine video which you can see below.

From there we're into a set of dongs full of charm and wit, with lyrics that aren't afraid to throw in some social commentary and caustic asides on the state of our nation. If you're looking for comparisons then there's more than a passing resemblance to Luke Haines & The Auteurs, both musically and lyrically, and at times there are hints of Edwyn Collins (whose label released Rotifer's last album).

This is the sort of intelligent, informed album that can trace its lineage from the aforementioned Auteurs, through bands like Hefner to modern-day proponents of this type of music (alt-indie?) like Benjamin Shaw, Ben Parker and Withered Hand (there's a musical connection there as well, with Darren Hayman from Hefner having played with both Rotifer and Withered Hand in the past). It's great to see that in an X-Factor age there are still people wanting to make records like this, records that reward repeated listening with a deeper understanding of both their subject matter and their writer.

My personal favourite track on the album is 'Black Bag', a song that starts with a melancholic piano and follows with lyrics about clearing out the wealth of personal effects you've accumulated during your life after you've died. As the guitars kick in the words talk of judging a person by what they've left behind, with an extremely catchy chorus of 'Put it in the black bag'. It's not all dour doom and gloom on the record though, as the jaunty 'Ms Pedantovic Resigns' tell the story of a woman at The Daily Express whose job it is to count the words in articles, and even that ends in computers with wordcount features forcing her to lose her job she does at least get a bottle of wine when she leaves.

The closing song 'So Silly Now' is another cracker, an acoustic lament about the obsession for the past that haunts pop culture, and which features the great line 'I guess that Neil Young could be your Spencer Tracy / I suppose Joni Mitchell could be my Doris Day in these darkest of days'.

Overall this album is a victory for quality, a beacon of songwriting light for a dark and confused world. Have a listen and buy it below.