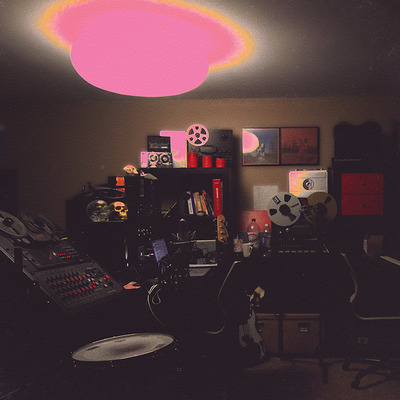 The third album from Ruban Nielson may well just be the summer soundtrack you've been looking for. From the opening bars of the now somewhat notorious title track you can tell that you're in for a full on blast of shimmering grooves and good vibes. There's been a lot of salacious talk about the subject matter - Ruban & his wife both fell in love with the same girl, she moved in but then the whole thing sort of fell apart - but to focus on that is is to do the rest of the album a disservice. As Ruban has said "there are more references to holograms than polyamory" on the record, so my advice is just to accept the song for what it is, don't judge the story or the storyteller, and move on.

If you do you'll get to the brief blast of power pop that is 'Like Acid Rain' and then the funkier, almost Prince-like rhythms of 'UR Life One Night'. Most recent single 'Can't Keep Checking My Phone', a disco-driven beast of a tune with a brilliantly catchy chorus. It's followed by 'Extreme Wealth and Casual Cruelty' which feels like the most downbeat song on the album, although it has an unexpected and soulful saxophone solo in the middle that really brings the song alive. A minute before the end it steps up a gear with a dramatic instrumental passage, which then gives way to 'The World Is Crowded - a super smooth groove that's made for relaxing by the pool on your holidays.

As we move towards the end of the record 'Stage or Screen' probably sounds most like older UMO tracks, full of phase and a bit more lo-fi, while 'Necessary Evil' is a darker, moodier slice of funk with some great guitar pieces.

Album closer 'Puzzles' is an epic track that somehow manages to meld The Beatles, Led Zeppelin and George Clinton into seven minutes of epicness.

I can't really think of anyone else treading the same path as UMO right now; their brand of soulful, funky indie really is in a class of its own. I'm pretty sure this'll end up in the end of year 'best of' lists from many people, especially me.

'Multi-Love' is out on May 25th on Jagjaguwar Records.