The Independent Label Market started a couple of years ago in response to Record Store Day, as a chance for labels to gather together and sell their own wares direct to their customers - a bit like a hipsters' farmers market but without the mud and faint whiff of cow shit. It's now settled in at Spitalfields Old Market in London where twice a year you can find enthusiastic label bosses old and young emerging from dank offices and dark venues to engage with enthusiastic punters.

On balance I think I probably preferred this to Record Store Day this year - you don't have to get up ridiculously early, it's less busy, there's not as many pointless re-issues to buy, and it's great to get a chance to talk to the label owners and even some of the acts themselves. This year it had the added bonus of a brewers market as well, so you could sample the brews of various London breweries as you wandered round - I had a nice Christmassy ale from the Windsor & Eton Brewery to quench my thirst.

So who did I visit and what did I buy? Here's are the highlights:


So overall it was a great trip - put it in your diaries for next year! 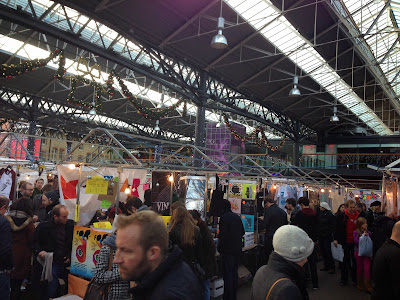