Hailing from Lisbon, Portugal, the due of Rodolfo Brito and Francisco Silva, mine a late-night seam of warped electronics, ambient sounds, effects and loops. The overall effect is a bit like going to sleep with the radio on and drifting in and out of consciousness while the radio slowly re-tunes itself. Their album 'Love' initially appeared towards the end of last year on a C60 cassette, and has since been afforded a digital release. 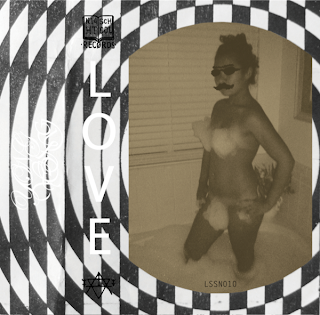 It's hard to pick out specific tracks or key points as it's very much something that should be listened to as one piece, but there are signposts on the journey - like the bit in 'Loboz' that sounds like Wall-E, or the dialogue on 'Bujumann' about Gandhi and Mother Teresa - that reflect just how trippy the destination is.
In part the lo-fi nature of the recordings and occasional dubby feel reminds me of early Peaking Lights stuff, but really the record inhabits a world of its own. Here are a couple of tracks from it, first off you can download 'Helder' here courtesy of the band themselves - let yourself sink into its repetitive vibe...

Next you can listen to 'Spray', which was the track that first brought them to my attention:

And then there's the final track from the album 'Escarnio Popular', which sounds like an Arabic souk from a sci-fi film:

Finally from their Soundcloud page, 'Material' appears to be the newest thing they've put out:

Plenty for you to get your teeth into there - enjoy!
Posted by DJ Cull at 12:07