Recommended music: 'Curve of the Earth' by Mystery Jets 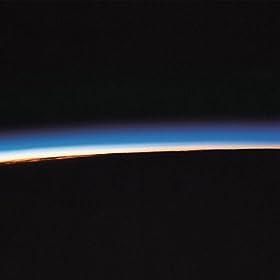 I must admit that I was ready to write off Mystery Jets as a spent force. A few minor hits a few years ago, then doomed forever to play mid-afternoon festival slots and gradually decreasing venues. Boy was I wrong! This is their magnum opus and one which should put to bed any notions of them being a trivial, lightweight band.

Not wishing to pigeonhole the music, I won't use words like 'psychedelia', 'prog', or even 'adult rock'. Suffice to say that this is a mature, polished, classic sounding record, whatever genre you think if fits. The band have talked of feeling like 'a gang again', like when they first formed, and the music certainly feels like it's been made by a group that are fully aware of and comfortable with each other. You feel that any of the tracks could go off into an improvisation and however loose it got they'd never lose control.

There's a depth and breadth to these tunes that really fits the expansiveness of the album's title. Take 'Midnight's Mirror', one of the stand-out tracks for me, which over the course of 6 minutes fits a couple of different choruses, a bridge, some twinkling acoustic guitar and some jangly electric, a synth bass and all sorts of drum rhythms into a song that could go on twice as long and I still wouldn't be bored with it. It's followed immediately by '1985', which isn't a prologue to anything Taylor Swift might have written, but is instead a piano-led ballad about the planets aligning with human emotions that explodes halfway through with a Coldplay-esque (in a good way) guitar riff. Meanwhile the next track 'Blood Red Balloon' has a vocal not dissimilar to 'Echoes' by Pink Floyd, a guitar riff that reminds me of Genesis, and all sorts of other stuff going on.

Although I've listened to this album loads of times since it came out a couple of weeks ago I get the feeling that it's still got a lot more to give and that I won't be removing it from my headphones any time soon. An essential purchase.