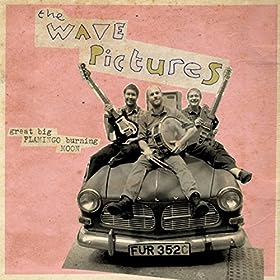 Not necessarily what you might expect to find recommended within these pages, but like we always say round these parts, there's only two types of music; good and bad, and this is definitely in the former category.

Recorded in three bursts of 2 days, the album is produced by the legendary musician and Stuckist Billy Childish, who also plays guitar and sings backing vocals and is credited with co-writing all of the songs (or at least the ones John Fogerty didn't write of, which more later). If you're unfamiliar with The Wave Pictures they've been around since 1998 and have released an average of one album a year since 2004, which is pretty good going.

From the moment that the title track cracks open the album you can tell you're in for a rollicking good garage rock ride. The fact that in places the track sounds a lot like 'Spanish Stroll' by Mink DeVille (ask your dad) does it no harm at all. By the time second track 'I Could Hear The Telephone (3 Floors Above Me)' rattles into view singer David Tattersall sounds like a cross between Lloyd Cole and Edwyn Collins, and I'd already got this marked down as one of the rock albums of the year.

Tattersall has a way with titles and wry, Morrissey-esque lyrics, and the overall impression created by the record is that the band are an undiscovered National Treasure - imagine The Kinks crossed with The Smiths and you'll be in the right lines. This is despite the fact that the last track on side 1 and the first on side 2 (you have to get the vinyl, it's that sort of album) are Creedence Clearwater Revival covers, something that Childish suggested but which somehow works perfectly in the middle of the album.

Overall this is a fantastically energetic, upbeat and fun rock'n'roll record that might just make you want to pick up your guitar again and form a shambolic good-time band. I'll see you in the garage.