My first trip to the Hooga in Chelmsford (I'm sure it won't be my last) was for what turned out to be the gig of the year (so far). I'm still not sure how Hooga managed to pull off booking the phenomenal Phenomenal Handclap Band, but this could well turn out to be one of those legendary nights that people speak of in hushed tones in years to come - "Do you remember the time the Phenomenal Handclap Band played Chelmsford?"

First up was local(ish) band Dead Cannons, from Colchester. They've got a bag full of melodies and hooks, some very Coldplay-esque guitar riffs, and were surprisingly good.

If you put the word 'phenomenal' in your band name you've clearly got a lot to live up to, but the Phenomenal Handclap Band more than manage it. Taking to the stage, appropriately enough, to handclaps, they gave us the tightest hour of live music that I've seen in a long, long time. Mixing tracks from their new album 'Form and Control' with older stuff like '15 to 20' and 'I Been Born Again' they had us clapping, dancing, stomping and singing, and were definitely enjoying themselves as much as we were, as you can see in the video below.

The hour they played flew by, and by the end of the gig they were crowned as my new favourite live band. Not only were they all kinds of awesome as a band, but they were genuinely nice people too, happy to chat afterwards. If you get a chance to see them then do so, or you'll live to regret it. 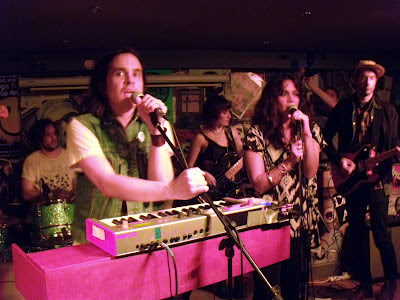