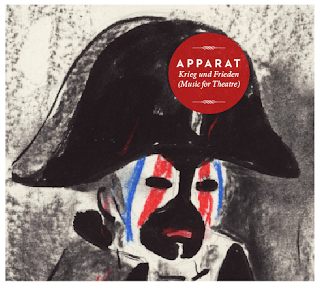 Not your normal, run of the mill album from Apparat, this is something very special indeed from Sascha Ring. The music on this record was originally written for innovative German theatre director Sebastian Hartmann's new production of Tolstoy's 'War and Peace'. Although a release wasn't planned for the music, by the end of the theatre run it had evolved into something that Ring felt deserved another life, so he took it into the studio with four other musicians and they made it into this. Amazingly intense and powerful at times, but shot through with moments of fragility, it plays out like a film soundtrack, and conjures up fantastically bleak images in your mind. Mostly instrumental, there are just two tracks with vocals, including the plaintive but uplifting closer 'A Violent Sky'.

There's more than a hint of Tim Hecker in some of the tracks, not just in the sound and the drones but in the power of the music. It points at a whole new direction for Apparat and one which I for one hope he takes. I love the fact that you can hear the ambience of the studio, the little imperfections and creaks in the background, there's a real analogue warmth to it that draws you in to the story. It works as a whole piece - Ring has stated that although there are individual tracks it's not a record that's designed to be listened to in small pieces, but rather in one long song. I guarantee that if you put 45 minutes aside to listen to it you'll emerge from it a better person.

You can listen to the whole album below - if you like it then please buy it, as I really believe that the word needs to be spread about this amazing record. The more of you that buy it, the more charts it will appear in, and the more people will hear about it.