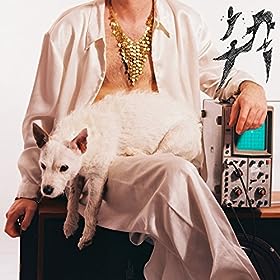 I'm not sure why I never got round to reviewing this when I first bought it, but lately I've been playing it a lot and realised that it'll definitely make my end of year list, so it's worth putting a few thoughts down about it.

Effectively the solo début album from Sam Dust, late of Late of the Pier, this is a funky, souly, electro-disco record that original and eclectic enough to appeal to left-field hipsters but also, given the right radio play, could launch some smash pop hits on the world.The moment the smooth, laid back bass of opener 'Occasion' starts to slink out of your speakers you know you're in for a good time.

As the records proceed influences emerge from Prince to Rick James to Basement Jaxx to Connan Mockasin (who Dust has previously worked with). Throughout it all there's a sense of playfulness and a lightness of touch that points to the fact that he's completely into the music he's making now. The moody tracks are sultry rather than sulky, while the dancier tracks are funky rather than full-on.

It all adds up to a huge success artistically (and incidentally, a record that for more deserved to be nominated for the Mercury Prize than some of the dross that made the list). If LA Priest is delivering the sermon you should definitely be listening.