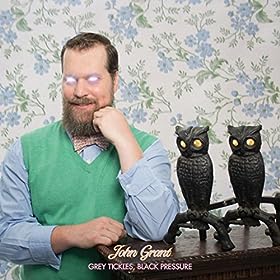 OK, so this is a bit of a strange one. After a week of listening to this record I like it, and I love bits of it, but I couldn't say I loved the whole thing, at least not yet, not like I want to. Maybe that will come in time, but for now it kind of feels like there's half a brilliant album tucked away inside this whole one.

That's not to say that it doesn't piss all over most of the dross that's been released this year. John's lyrics are at their most barbed and cutting throughout - here's a selection of my favourites:

"You and Hitler oughta get together, you oughta learn to knit and wear matching sweaters"
"There are children who have cancer, so all bets are off, cause I can't compete with that"
"Global warming is ruining my fair complexion, augmenting all my imperfections"

Musically it's all over the place, which is sometimes good and sometimes less so. From the glam-rock stomp of 'You and Him', through dark electro like 'Black Blizzard' and 'Snug Slacks', into the 80s disco of 'Disappointing' and onto the lush sounds of 'Geraldine', there are plenty of ideas on display here. But part of me wishes he'd just crack on and make a full on electro-assault on our senses, maybe under an alias, for one album and them come back with a piano / acoustic epic for the next.

High points for me are the verse and clarinet on 'Down Here' and the Wichita Lineman-esque ending to 'Geraldine'. And having seen most of the album performed live at Rough Trade last week I'd say some of the songs have more power and hang together better live than they do on record.

Grant is still one of the most original voices making music today, and it's great that he's given such artistic freedom by Bella Union. I just feel that his ship might benefit from the occasional steer every once in a while.