Recommended music: 'Faith In The Future' by Craig Finn 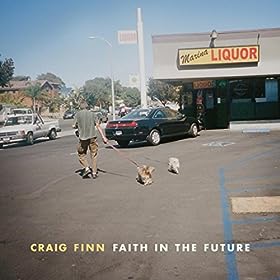 Craig Finn's second solo album is a successful attempt to present some gentler, and more personal songs than he normally presents via The Hold Steady. Dedicated to his mother Barbara who recently passed away, there's a definite air of death and melancholy about this record. That's not to say that it's depressing though, rather it's just accepting of the fact that death is a part of life that comes to us all in the end.

In amongst the trademark character-led songs ('Sarah, Calling From A Hotel' being my favourite) you'll find one of the few listenable songs to have ever been written about 9/11; 'Newmyer's Roof' telling how Finn & his boss at the time watched the fall of the World Trade Centre while drinking beer on a rooftop at 9:30 in the morning. "I saw the towers go down from up on Newmyer's roof, Yeah we were frightened, yeah we were drinking, it was all so confusing". If you see Finn play this live he'll tell the story of how his present-day girlfriend was actually in one of the towers at the time of the attack and managed to escape, making this an even-more personal story than it already was.

There's also 'Going To A Show', which could be as much about performing a gig as watching one; "Some nights it just seems like the same old thing, some nights it feels like a new frontier". Meanwhile people and places come and go - Christine goes to Memphis, Sandra stays in Scratton, Maggie's husband goes to Colorado and Arizona, and St. Peter hangs out in New York.

Musically it's not particularly adventurous but there's a warmth to the arrangements and a familiarity that allows them to stay in the background so you can focus on the crystal-clear delivery of the lyrics. Overall, as with all of Finn's output, you're left with a sense that despite the world being a bit shitty at times, things will work out in the end.