The latest release from the collective from Minneapolis consists of 2 EPs, recorded a month or two apart and then put together for what they describe as 'a two-part series of one musical experience'. 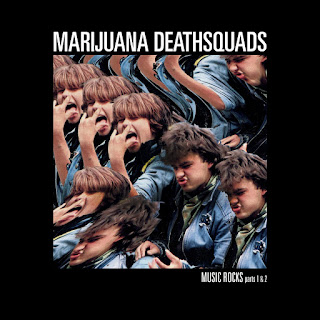 The band are saying that this is 'the best, most representative recording' of them to have been put out so far. it certainly reflects their penchant for drummers (on occasion they've had 6 drummers on stage at once) and is full of pounding, driving rhythms, distorted vocals and electronics. As well as founder members Ryan Olson (GAYNGS leader and Polica producer), Isaac Gale and Stefon Alexander (P.O.S) the tracks feature a whole host of other friends and local musicians, most notably including Channy Leaneagh, who sings in Polica. To get your free download of the album just click on the picture of the album sleeve above.

The band are in the middl of a busy and fertile period, having just played a month-long residency and also announced an entire remix album of P.O.S.'s 'We Don't Even Live Here', which will be given away later this month. They also found time to put together a near 27-minute long track called 'The River' which will be released later in the year - you can listen to that below.

One last thing - if you're wondering where the band's name came from, I asked Isaac Gale that very question - this was his response:

The name Marijuana Deathsquads just sort of appeared naturally, as great poetry often does. The words were put together and the inspiration struck that it would be a fantastic name. We try our best to pull off as many ridiculous feats as a band that we possibly can...
Posted by DJ Cull at 15:23