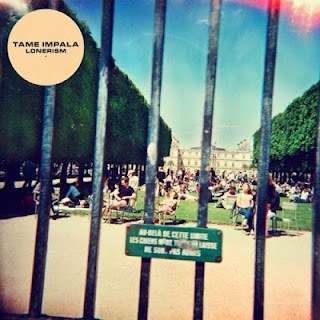 It's going to be difficult to review this album without mentioning The Beatles, so let's get it out of the way now - 'Lonerism' sounds a lot like the post 1966 psychedelic era Fab Four i.e. when they were at their most interesting. But that's not its only influence - from The Flaming Lips to glam rock there's a bag full of references here that never overwhelm the songs that Kevin Parker has created here. Instead they combine to create something that feels warmly familiar that you can luxuriate in, as the trippy guitars, harmonies and melodies dive out of your speakers and into your cerebral cortex. Don't get me wrong - this is not a record that sounds nostalgic - it's forward thinking and of its time. 'Lonerism' doesn't sound like a record that was made in the late '60s or early '70s - it's more like Parker has brought all of his favourite musicians from that era forward in time to see what they kind of songs they would make in 2012.

So what if 'Why Won't They Talk To Me' sounds like it was produced by Jeff Lynne (of E.L.O. fame)? Or if 'Elephant' matches the Super Furry Animals 'Golden Retriever' spliced with the instrumental section of Pink Floyd's 'Money' with some stuff off 'Animals' thrown in for good measure? Wonder instead at how one man in a studio in Perth, Australia, has made such a brilliant record, which matches fantastic music with lyrics about failed love, failed lives, and the general hopelessness of living. If 'Lonerism' is a lifestyle choice then expect many more people to be sucked into its cult of solo living if it results in this much creativity.

Possibly the best album ever to come out of Australia (can you suggest anything better?) and certain to feature on the end of year 'Top 10' lists of most discerning music critics - make sure it's on yours too.

You can listen to a couple of tracks from the album below.