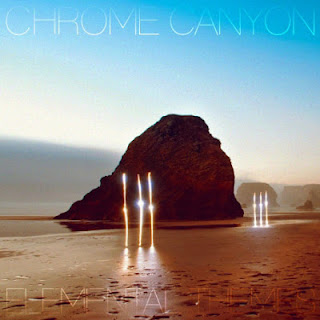 Not what you might be expecting from the Stones Throw label, and I must admit that having heard a couple of snatches of this before I got the album I thought I was going to hate it. But after the first play of the whole album end to end I loved it so much that I wanted to put it straight back on again.It's one of those rarities these days where listening to the album in one go really pays dividends - the more you sink into the mood and atmosphere of the record the better it gets.

So what does it sound like? Imagine the soundtrack to the best film Ridley Scott or John Carpenter never made. Imagine a record that sounds like electronic musical equipment had stopped being developed after about 1985. Imagine influences from Giorgio Moroder, Vangelis and Pink Floyd. Yes, that's a lot of imagining to do, but that's what this record encourages. As the tracks unfold you'll be picturing the scenes from a non-existent film, seeing the action played out in front of you as the music plays on. It's like Morgan Z (for he is Chrome Canyon) really did go back to the future to create a vision of the future that's welded to the past.

The title track even throws in some dialogue, as does 'Carfire on the Highway'. And as that staple of early 80s soundtracks, the saxophone, slowly drawls its way through an appearance on the fifth track, before making way for an evolution into something from A Clockwork Orange, you really will feel like you're in a cinematic time warp.

This is much more than a pastiche, or a homage to the past. There are some great melodies in here, some brilliant atmospherics, and hopefully the fact that Morgan's chosen specialist subject on Mastermind would appear to be 'classic electronic soundtracks' won't stop this record getting the exposure it deserves.

Right, I'm off to write a film called 'Elemental' so I can use this as the soundtrack, but in the meantime I'll leave you with this quote from 'Carfire On A Highway' which stands as a pretty good epitaph for the album:- "...a scorched reminder of what we saw ourselves as, and how far from it we still were...".

You can grab a free track from the album below.