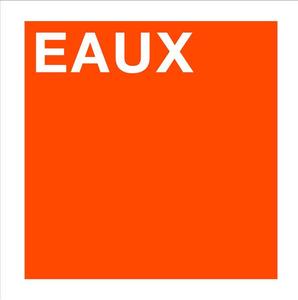 Formed by members of the Sian Alice Group (Sian Ahern, Stephen Warrington & Ben Crook), this 7" is the first recorded output by Eaux, and frankly it's rather brilliant. Much more electronic than their previous material, the tracks pit Sian's voice to soar and weave over percussion, loops and layers of synths.

First track 'Luther' is beautifully melodic, with a filmic quality which means that it wouldn't sound out of place as the theme music to the TV show it's (probably not) named after. The vocals are fairly conventional but the electronic backing gives the track more of an edge than you might expect.

For me though, 'No More Power' is the killer track here. Much harder than 'Luther', the driving rhythm   and pounding, arpeggio'd synths are topped off with vocals that are more sounds than words, although the 'No More Power' refrain can be clearly heard as it drifts over the edgy keyboards. Teutonic in nature, but with a surprisingly emotional quality, it's an awesome song that has immediatley become one of my favourites of the year.

You can buy the 7" direct from Morning Ritual here, and listen to the tracks below.