Recommended music: 'My Band Is A Computer' by Chuck 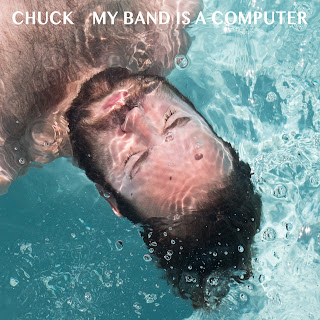 I knew I was going to like this record from the moment I saw its title. The first release from Old Money Records (part of the Audio Antihero empire) is an introduction to the sad and wondrous world of Charles Griffin Gibson, who as Chuck has put out a load of records independently, from which these tracks have been culled. Despite this it flows pretty seamlessly as an album piece, telling tales of life, love and loss in New York.

With a vocal style that's part Jonathan Donahue, part Jonathan Richman and part Ezra Furman, Chuck plays the role of outsider as he narrates his tales of New York life. 'Bushwick Girl' is one of the highlights, as the 'L' train announcer gives way to a whimsical tale of an imaginary idyllic life in Brooklyn. 'Phoebe's Lips' (one of many songs about girls on here) is a darker love story about Mikey & Phoebe though, with Mikey's erectile issues contrasting with how easy love was when he was younger. Meanwhile 'The Internet' is possibly the the saddest feeling and most acoustic song ever written about a day in the life of a computer - "chatting with girls who claim to be ex-men, selling your dad's wedding ring, videos of rappers with expensive things" - all human life is here.

'Death' and 'Wipe Out', are as you can imagine from their titles, not the happiest of tracks, but perversely they're two of the most musically upbeat tracks on here. The album closes with 'Let's Make Out', a mournful tale of the end of the night (and possibly the end of the relationship) - "In the darkness on your couch, with nothing left to talk about...Let's make out, let's order take-out" - like most of Chuck's stories you're not sure if this one has a happy ending or not.

There's lots to love about this record - like all good things in life it has some darkness to highlight the light, and it's comfortingly lo-fi approach feels warm and reassuring. The album is out on September 9th and you can order it here.