Recommended music: 'Shadow of the Sun' by Moon Duo 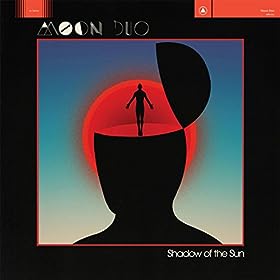 Back with their third album proper (or 6th if you count the 2 remix albums and 'Live in Ravenna') the futuristic psyche-rock pairing of Ripley Johnson and Sanae Yamada might be treading familiar paths, but maybe in different shoes. There's fuzzed up garage rock on 'Wilding', goth-punk on lead single 'Animal' and foot-stomping surf rock on 'Zero', but that's not all that's on offer. 'In A Cloud' is a more gentle and melancholic take on psychedelia, while 'Slow Down Low' includes acoustic guitars and some whirly organ in its armoury. 'Ice' meanwhile is a hypnotic and throbbing way to end the album (or the vinyl version of it at least).

Talking of vinyl, this is one of those releases that cries out to be bought in this format. Not only does it look resplendent in red vinyl but it comes with a bonus 7" featuring 'Animal' and a bonus non-album track (it sounds better too of course).

With a solar eclipse due next week this would be the ideal album to zone out to as you sit in the shadow of the sun.
Posted by DJ Cull at 15:10