Recommended music: 'Somewhere Else' by Indians 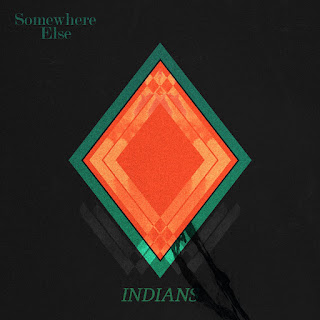 I first came across Indians last year when they were supporting Lower Dens at Hoxton Bar & Grill. It's rare for me to hear a band in that situation and immediately want to listen to their music again and again, but that's what happened on this occasion, and I dutifully queued up to buy the Magic Kids 7" from the merchandise stall.

A few months later the début album is with us, and it's brilliant. Although there are definite echoes of The Antlers on here, with occasional hints of Bon Iver (especially on 'I Am Haunted'), the record stands alone as a product of one man - Soren Lokke Juul - and his surroundings. Juul hails from Copenhagen, and maybe it's just me but Scandinavian bands always seems to have an organic feel to their music, like they are somehow incorporating the particular (sometimes brutal) elements of the natural world that surround them into their songs. Even his choice of location to film the Indians 4AD session (see below) reflects a desire to add the air and the sea to his band's performance.

The songs themselves are beautifully structured, mainly keyboard driven but with some guitar, especially on the aforementioned 'I Am Haunted' and the mostly accoustic 'Cakelakers'. The opening 2 tracks 'New' and 'Bird' are particularly Antlers-esque, while 'Magic Kids' starts gently and then builds a few layers of sound to smoothly drag you in. 'Reality Sublime' is one of my favourites, starting with simple synths and then adding an equally simple drumbeat to create a captivatingly warm sound. 'La Femme' and 'Melt' continue the gentle, sometimes fragile sound, with the latter's acoustic piano and keyboard bass being especially effective.

The title track wraps things up, and is probably the most powerful track here. Starting quietly, it works itself up, not into a crescendo, but rather into something stronger. The restraint shown hints at a massive force that is just under control but that could burst forth at any moment, like a suddenly swollen stream that is straining at its banks.

Overall this is a very accomplished first record that after a few listens brings a lovely warm familiarity. For someone who started this project just to challenge himself and satisfy a creative urge Juul is cearly very talented and I can imagine a queue of would-be collaborators forming to work with him.

'Somewhere Else' is out on January 28th on 4AD Records. You can watch the Indians live 4AD Session (filmed in my lovely home county of Essex) below to get an idea of their sound.