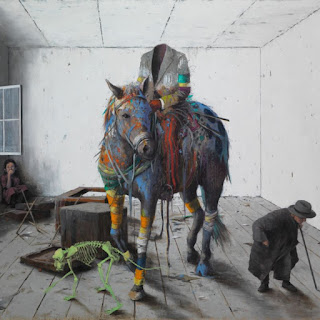 It's no secret that I'm a massive fan of UNKLE, but that doesn't mean that I think everything they've put out has been an unqualified success. In particular the last album 'Where Does The Night Fall' suffered from having too many guest vocalists and a lack of a single vision or theme - to me it didn't really know what it wanted to be which meant in reality it really wasn't much at all.

I'm pleased to say that's not the case with 'The Road: Part 1' though.With the exception of Mark Lanegan there are no real 'starry' guests - instead Lavelle chooses to work here with a pool of singers he's been using for some years now, to much greater effect. On a number of tracks they - Elliott Power, Eska, Mink - share the vocals which adds to the ensemble feel of the record. And while there are number of different types of UNKLE on display here - instrumental soundtrack UNKLE, deep beats UNKLE, rock band UNKLE - there's a cohesiveness to this album that's been lacking in the past. It's a cliche but 'The Road' does feel like something of a journey, and it least on here all of the participants are travelling in the same direction.

Mostly Lavelle's desire to front a rock band is kept in check, in favour of strings, some dark electronics and more sombre, more atmospheric tunes (although the Elliott Power-led songs do now make it sound like he wants to front Massive Attack instead). We can forgive him his moment on the mic on 'Nowhere To Run / Bandits', even if it does prove he's a better producer than lyricist. The tracks that have been around for a while - 'Cowboys or Indians' for example - fit well with the ones we've not heard before, and show that he's been thinking about this release as a whole items rather than just a collection of tracks he's gathered over the past 5 years.

It's clear that this record means a lot to Lavelle, particularly in the way he's packaged it and tried to present it almost as an art project rather than just a record - and as a result of this care and attention he's given us a record that's up there with UNKLE's finest output. I can only hope that there's a 'Part 2' and we don't have to wait as long for it as we did for 'Part 1'.