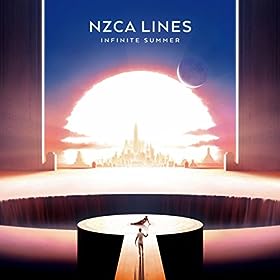 The first essential album of the summer is here - and it's still only January! (I'm sure there must me some kind of marketing reason for releasing a summery-named and sounding album in the middle of winter, but it certainly escapes me.). Ostensibly the solo project of Michael Lovett, who's joined on this release by Sarah Jones (Hot Chip) and Charlotte Hatherley (Ash), the record melds sci-fi concepts with European electronica, resulting in a gloriously bright and warm sound. Themed around a vision of a future earth threatened with extinction by a sun that's expanded to a red dwarf. While one half of the Earth is embracing the destruction the other half is trying to build something new, but generally they're all having a good time because of the warmth of the sun - essentially they're partying like it's 1999, a track that's clearly been some inspiration for Lovett.

Musically it sounds a bit like Hot Chip, and a lot like Metronomy ('Dark Horizon' has a synth line like a slowed-down version of the one in 'The Look'), while the likes of Daft Punk and Ratatat can also be felt in the background.

My favourite thing on the record is the dual guitars of 'Persephone' which are an aural delight and something that deserves to be preserved in a time capsule for all eternity should the end of the world actually come upon us.

Anyone who's booking a summer festival should be putting NZCA Lines on the top of their booking list - I can just imagine how great this would sound in the sunshine at Glastonbury. If you're feeling the winter chill then buy this record, it'll warm your soul.