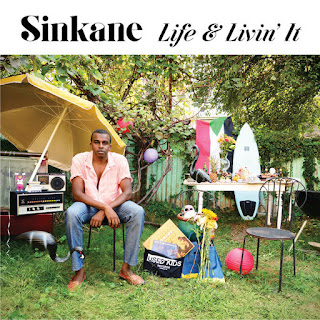 The new album from Sinkane is here, and it's by far their best yet. Informed by an extensive touring schedule, both as themselves and as part of the Atomic Bomb! William Onyeabor project, it successfully mixes the African rhythms of 'Mars' with the more mature lyrics and r'n'b grooves on 'Mean Love' to deliver a satisfying journey through the human experience.

Most of the record was recorded live by the band playing together, and you can feel the warmth and unity that provides to the tracks. the lyrics meanwhile encourage positivity and togetherness, as message that is sorely needed in these troubled times. "If we illuminate ourselves we'll overcome" Ahmed sings on 'U'Huh', "Kulu shi tamaam", which is an Arabic phrase meaning 'everything is ok'.

Possibly my favourite song on the record is, ironically, 'Favorite Song', a song inspired by Ahmed's dj sets and that moment where you put a record on that everyone knows and loves.

Elsewhere there are disco grooves on 'Telephone' and some heavier afro-caribbean vibes on 'Theme from Life & Livin' It', while the whole album is underpinned by an infectious feeling of friendship and goodness.

If you haven't seen Sinkane live then do your best to catch them on this tour - I've seen them 4 times now and each time I've left the venue with a smile on my face, their enthusiasm and joy is infectious.