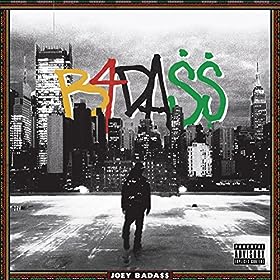 I've been singing the praises of Joey Bada$$ since back in 2012 when the '1999' mixtape first appeared. That was followed by two more, first 'Rejex' and then 'Summer Knights', which both served notice of a major talent on the way. So here we are in 2015, and 'B4.DA.$$' doesn't disappoint at all. Sure to feature as one of the best hip-hop albums of the year, it mixes the music and style of old-skool hip-hip with the swagger and commercial sensibilities of the best of today's rap acts. He shows that he can switch from the likes of 'Paper Trail$' to the pop smash of 'Teach Me', which features Kiesza and shows that big-time collaborations can be done with style and panache without having to pander to the lowest common denominator r'n'b clichés. I particularly like 'On & On' which features UK singer-songwriter Maverick Sabre, but really you'd be hard-pressed to find a track you couldn't like on this album.

As a bonus you can download a free track below called 'Born Day (AquariUS)' that Joey gave away on the day the album came out.

I expect Joey to pretty much be on a worldwide tour for the rest of 2015, this album is so good it's going to smash open the doors for him. You can stream some of the album below, but really you should be spending some of your hard-earned bucks on this. It's the first essential purchase of the year.