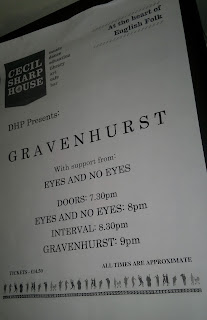 A rather unusual and quaint venue (the home of English Folk, apparently) but they do a decent line in real ale and were warm and welcoming to us. My learned friend (who'd been there before) said that there are normally chairs put out in the venue, but the promoter had asked for these to be taken out - maybe they were expecting a moshpit to develop?

Eyes & No Eyes were the support - an interesting four piece who do the quiet/loud/quiet well, with lots of experimentation and, unusually, a cellist.

Nick Talbot (Gravenhurst) took to the stage flanked by 2 ladies and entertained us for over an hour with his beautiful melodies, bursts of loud guitar, and a witty line in banter that bordered on stand-up comedy. Having had a tough time in Nottingham the night before - "At least 40 people paid to see me and then stood and talked all evening. I told them that it wasn't like watching the TV, and I could actually hear what they were saying, but they didn't take any notice" - he was pleased to have an appreciative audience.

The only heckling came when he came back on for an encore. A lady shouted out "Are we allowed to call out for songs we like?" and Nick's reply - "Yes Mum, you can, that's what an encore's for" - had the audience in stitches and gained cheers for his Mum & Dad, who were standing at the front.